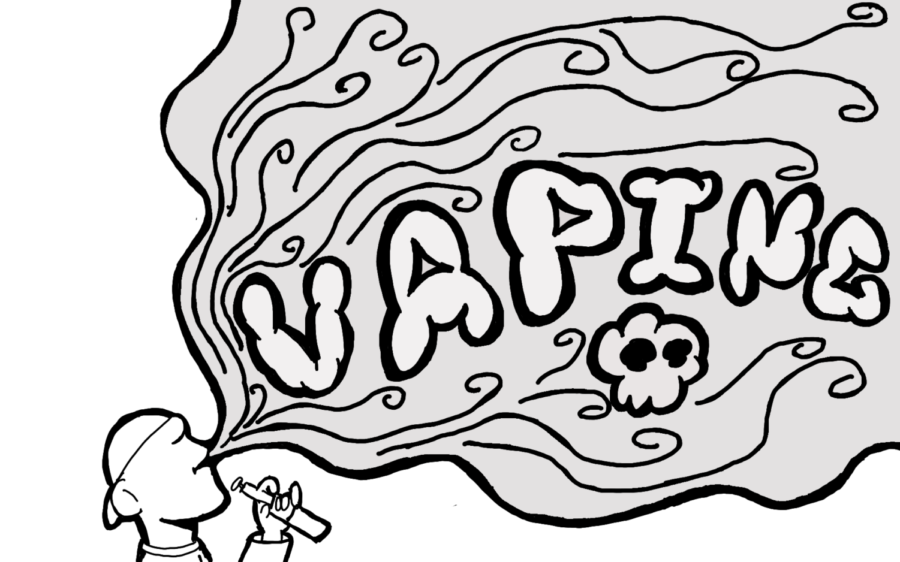 Vaping happens everywhere. It seems like an oppressive unspoken secret, something that students and teachers know goes on yet don’t want to talk about. The reasons for this are quite obvious. It is against school policy, and in some cases illegal. There seems to be one question that always goes unanswered when it comes to teen vaping: why? What makes it so appealing? There must be some other attraction besides the “flavors.” If most people really wanted the taste of bubblegum, they would chew bubblegum, not get a bubblegum flavored vape. There must be a much more hidden reason to the help justify the spike in teen e-cigarette use.

At this point, vaping seems to be a part of our modern culture. And that in itself has deeper roots. Smoking itself was a major part of our culture up until the 90’s. It was once considered (even as recently as the 1980s) an essential part of both the masculine and feminine culture expected of both men and women. Said otherwise, men weren’t men if they didn’t smoke, and women weren’t truly women if they didn’t smoke. Though this is a slight generalization, it still illustrates the culture that used to surround smoking. Though such attitudes are gone now, they have a lasting impact. There is still some level of acceptance towards smoking. According to the New York times, one-fifth of all teenagers regularly use tobacco products, predominantly cigarettes and electronic alternatives. That is almost eight-and-a-half million teens. Despite the best efforts of federal and state funding to educate and raise awareness about the detriments of smoking, it will take more than 20 years of awareness campaigns to stamp out the legacy of attitudes that persisted for over a hundred years or longer. But that’s not what this article is trying to illustrate. The question guiding this piece, as stated earlier is: why? Particularly, why is vaping so popular among a high school aged demographic?

People will always find a way to fit in, however irrational. It stems from survival instincts that go back thousands of years, if not more. People wanted to fit in with groups to increase their chances of survival. Yet with the need for this long gone, people have replaced the need to fit in to survive with the need to fit in to get approval and validation from others. Yet how and why does vaping fit into this? Why does vaping seem to be the new seal of approval? It might have something to do with the same attitude that used to surround smoking. The connotations of maturity and “coolness” that once surrounded smoking more prevalently still exist to a degree in today’s culture. In movies, books, and comics, many tough, strong, “cool,” and engrossing characters smoke. Vaping is seen as a less dangerous alternative to smoking that still carries those masculine, seductive stereotypes attached to smoking. It makes people feel cooler, prettier, stronger, etc. without all the health risks of smoking. Vaping also provides a ritualistic experience that makes vapers feel relaxed. Not only do the chemicals inside provide relaxation, but many of the actions, from inhaling the vapors to blowing out the smoke, provide relaxation. This can happen because vaping gives people something simple and stress-free to focus on, or it may be the social associations. Vaping is often a social activity, a place where people can free themselves from societal and authoritative statutes and restrictions and let loose.

The social aspect may also be another thing that makes vaping popular. People can congregate together to vape, and this non-judgmental company may be a large part of why people vape. Sometimes people vape together just to vape, sometimes it may be otherwise. Vaping provides a social outlet and the idea of going to places like vape lounges may appeal to a lot of people, who want the opportunity to let loose, socialize, meet new people, all while vaping. But whatever the reason, despite how people feel about it, one thing everyone is going to have to accept is that it is now part of modern culture.