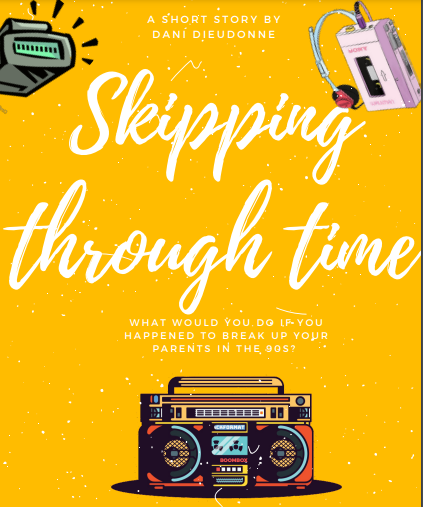 “Well” Ivory starts, loudly clapping her hands together. “We came here to apologize-” Ivory’s words get cut off as James throws down the rag he was holding.

“Your friend here ruins a relationship and you want to apologize?” Scoffing, James shows Kimberly and Ivory his back as he walks away.

“Kim,” Ivory whispers to her. “He has a point,” Kimberly mumbles, pulling down the sleeves of her hoodie over her arms. Ivory appears in front of Kimberly, leaning down to face her.

“Look, I’m glad that you’re admitting that you’ve messed up, but Kim, we only have a day to make things right. And from the looks of it we probably have less than that.” Ivory motions to Kimberly’s fading hands.

Ivory goes on. “Kim, we’ll get nowhere if you keep hesitating like this, and I want my carefree best friend back. I’m tired of doing all the talking here,” Ivory continues.

The breeze pushes between the two of them, Ivory lets Kimberly think about her words.

Stepping back, Ivory waves Kimberly off. “Fine, we’ll figure things out another way.” Disappointed, Ivory walks away from Kimberly.

“You talk as if we’re in a movie!” Kimberly shouts, stopping in her trail. Ivory looks back at a grinning Kimberly.

“Can you blame me? I thought I lost you for a moment!” Ivory replies back, watching Kimberly catch up to her.

“I’m sorry, I just didn’t want to mess anything else up,” Kimberly sighs. “But I can’t let you do all the work. I got myself into this situation with my parents, and I’ll get myself out of it,” Kimberly proclaims.

The two of them approach the shop’s front door and Kimberly takes a deep breath.

“Okay,” Kimberly says, her eyes staring at the door’s handle.

Closing her eyes, Kimberly pulls out her “good” hand to open the door.

The side door that the girls walked through chimes as they enter what looks like a typical mechanic shop. It’s a complete contrast from the outside world, small and dim, as music plays over the speakers.

“Where could he be?” Ivory whispers.

Kimberly takes a daring step forward. “Not sure, let’s head to the front.” With her friend closely behind her, Kimberly and Ivory shift to the front of the store.

“Hello?” Is the first thing that Kimberly asks. Looking back at Ivory, she shrugs, walking away from the counter to look around.

“You two, again?” James appears from the back, a frown across his face. Kimberly’s stomach fills with butterflies.

“Look James, I’m sorry about breaking you and Leah up at the diner yesterday.” Kimberly tries, however James shakes his head.

“I don’t want an apology. Sorrys mean nothing,” he says, walking away from Kimberly to fix items behind the counter.

“They don’t, but that doesn’t mean I can’t give you one. I think you and Leah can work things out if you just talk.” Kimberly suggests. Ivory comes to Kimberly’s aid as James remains silent.

“You think I didn’t try that? I’ve been calling her since yesterday,” James admits to the two, facing them now.

“Maybe we can help?” Ivory speaks up. Both Kimberly’s and James’ eyes burn into her. “I mean it’s worth a try?” Ivory whispers.

“Oh no. I’m not letting the strangers who broke us up, “fix us”. What do you two think this is? A story?” James humorously laughs as he walks further away from the two.

Before Ivory can open her mouth, Kimberly interrupts. “What she means is, you and Leah seem like a great couple.  Yesterday was a mistake on my part, and we’re here to at least try to make things right so everyone can put this issue to rest. We promise you this isn’t any funny business.”

Kimberly’s eyes fall on James, trying to read his face. However, he is emotionless in front of the two. Kimberly looks at Ivory, silently motioning for them to leave.

The two give up, as they walk towards the door. Before they touch the handle, they hear a voice. “For some strange reason, something is telling me to trust you two. So I will. But if you two do anything to make this situation worse, it’s over for the both of you,” James warns them.

Eyes lighting up, Ivory and Kimberly rush back over to the countertop. Staring at James, they say nothing. He does the same.

“What are you two staring at me for? Let me hear what you’re thinking about.” Laughing, James unfolds his arms and rests them on the countertop.